Husband John is addicted to fishing. He has no such passion for cooking. 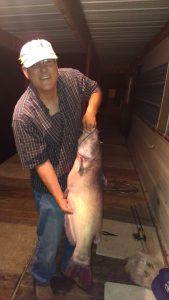 He would happily fill a freezer with this season’s catch, and then buy another freezer before making a dent in his piscine loot. We have the same dilemma with venison, but that is another article. I am forever looking for new ways to cook his most frequent catch, crappie. Say “croppie”, please, despite the spelling. The name likely derives from the French crapet, meaning “sunfish.” A popular game fish, especially in the central states, it is also called Oswego, speckled, calico, or strawberry bass, or specks, depending on your region. Whatever the moniker, they are all in the perch order. White fleshed and mildly flavored, they adapt, fortunately, to a variety of cuisines.

y preference over its New England rival, but the New England milk and butter base can be adapted just as easily.

Slop a little olive oil in the bottom of soup pot over medium heat. Add diced bacon and cook until done. Remove bacon and set aside. Add onion, celery, carrots, and garlic to the flavorful fat in the pan and saute until they start to soften. Add stock and potatoes and let simmer until potatoes are getting tender. Add tomatoes and herbs and continue to simmer for about 20 minutes more, letting the flavors meld. If drinking white wine while cooking, throw a splash of that in, too. Add the fish and the reserved bacon near the end of cooking. The fish will cook quickly, so keep the heat low. The soup never needs to boil. It prefers to simmer gently, wafting seductive aromas throughout the house.

Wise words about this chowder:

Soups are marvelously forgiving about omissions and substitutions, it’s one of their many charms.