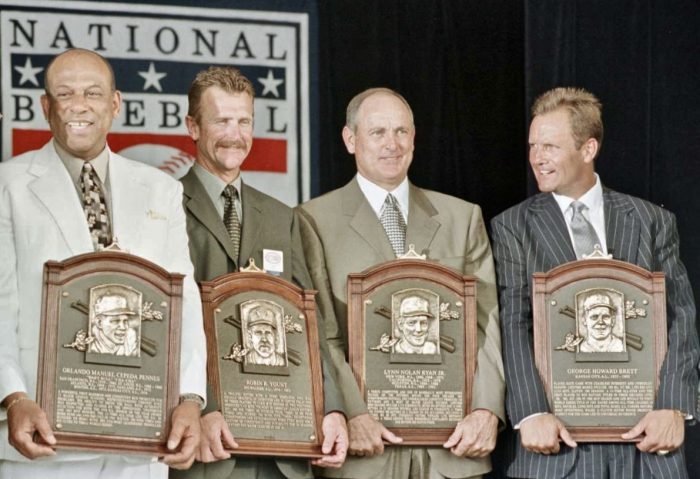 The National Baseball Hall of Fame saw a tremendous Induction Weekend in 1999. The Baseball Writers had elected, on the first ballot no less, three major name players to the game’s highest status- Nolan Ryan, Robin Yount, and George Brett. The Veteran’s Committee made it a quartet with Orlando Cepeda. Picturesque Cooperstown with its 2000 +/- village residents copes admirably when its population swells by two to three thousand per cent on that annual weekend in July. The Class of 1999 was expected to draw in excess of 50,000 fans and rooms were exceptionally scarce. Adding to the densely populated celebration, the Bush family was attending in honor of Nolan Ryan and bringing the Secret Service with them.

It was our first year in Cooperstown. We moved into our sprawling Victorian in late January and the renovation train immediately rumbled nonstop. We stripped and ripped, rewired and re-plumbed, dug and hauled and plastered and mudded and built- big projects that made dust, filled dumpsters, and demanded crews of tradespeople. With mountains of work ahead of us, I still promised the Hall that Bryn Brooke Manor would provide lodging in six short months.

I was true to my word, though I was still hanging wallpaper the day our guests were to arrive. It wasn’t the restoration heights we’ve achieved twenty years hence, but it was safe, clean, and light years from where we started during the snowy months.

Our first guests for our first Induction Weekend arrived late. Everyone was coming from earlier time zones. By midnight I was on fumes, but gamely ready to welcome West Coast arrivals. Our house is a big “L” shape; I can watch guests arrive from the kitchen, where I was prepping breakfast and staying caffeinated. Finally, the first car appeared through the stone pillars. I was expecting Sam Suplizio, coming on behalf of Robin Yount. As the gentleman entered the front door, I headed from the kitchen, through our rambling house, to the Great Hall (the nineteenth century version of the living room, sort of.) Without actually seeing my first guest, I called, “Sam! How nice to meet you!” I looked up to see a tall man extending a huge hand toward me. He said, “Hi, I’m Rollie Fingers.” I saw his signature mustache, caught my breath and said “Of course you are!”

His wife, Lori, made a beeline to the sofa and embraced our old dog, Jetta. Lori had a massive mane of red hair, so my husband, John, has forever referred to her endearingly as “Blaze.” Rollie dropped off a sandwich and potato salad for his agent who had yet to arrive. He was sure that no eateries would still be open, and he was right. A considerate gesture from a thoughtful man. He signed a ball for me and patiently waited while I called my baseball zealot brother Ken, the reason I moved to Cooperstown, to let him know that Rollie Fingers was standing in my living room.

It was a Hollywood scripted introduction to Induction.